Let us focus on the first 1000 days of a child, says nutritionist.

Sharon Naluwenda, a nutritionist at Mulago Hospital wants emphasis put on the first 1000 days of life if Uganda is to have a healthy society.

Speaking to a group of journalists attending a dialogue organized by the Ministry of Agriculture, and Hivos on ‘positioning media for policy influence of food and nutrition security in Uganda” at Hotel Africana recently, Naluwenda said the current situation, especially among children, calls for urgent attention.

Citing the Demographic and Health Survey 2016 Report she revealed that 29% of the children below 5 years were stunted. She attributed this to poor nutrition in the first 1000 days

“Growth and development occur in these first 1000 days,” she said. “You need a balanced diet in this period.”

According to UNICEF, the UN agency for children the first 1,000 days of life is a delicate time when the development of want a human being will be in the future is decided.
“The first 1,000 days of life – the time spanning roughly between conception and one’s second birthday – is a unique period of opportunity when the foundations of optimum health, growth, and neurodevelopment across the lifespan are established,” it states.

It argues that this period provided the best opportunity to provide optimal nutrition to ensure normal development and also the time of greatest brain vulnerability to any nutrient deficit.

This is because the first 1,000 days are characterized by rapid rates of brain (neural) development.

It reveals that at least 200 million children living in developing countries are unable to explore their potentials because of this problem.

Naluwenda says a balanced diet is a meal that has all the necessary food. This includes carbohydrates, proteins, and vitamins

Related to nutrition, she said the baby should access the mother’s breast in the first 30 minutes after birth.

“Don’t give the baby anything else,” she advised.

She said after the first six-month breast milk can be complemented with other foods.

Dr. Florence Tushemerirwe, a public health nutritionist at Mulago School of Public Health agrees with Naluwenda on the importance of good feeding in the first 1000 days

She says it prevents stunting and with this, the children will have their right height by age five. She adds that feeding well the child in the early stages also has other multiple advantages like prevention of diseases

“When you feed a child well in this early-stage you prevent the emergence of non- communicable disease in the future,” she explained.

On the balanced diet, she says a pregnant mother should have, 1/3 of energy foods, 1/3 of protein and 1/3 of disease prevention foods like vegetables.

For vegetables, she says they should be steamed if possible. Otherwise, they should be boiled on light fire with little water to prevent nutrients depleting.

She adds that during pregnancy the mother should have more on the plate to cater for the fetus.

She future encourages more protein for the mother in the third trimester, more meat, eggs, and beans.

But there is also good news in the fight to mitigate stunting. The UNICEF report also reveals that the critical or sensitive periods of brain development susceptible to specific nutritional deficiencies are increasingly well defined, making prevention of long-term deficits with well-timed nutritional interventions during the fetal period and first years of life a true possibility. Uganda’s government has taken deliberate steps to mitigate the impact.

Naluwenda says mothers are giving at health centers ante-natal care where mothers are taught models to complement the child’s meals. The government is also celebrating the Child Health Days in April, World Breast Feeding weeks and Physical Activity where President Museveni has been the chief guest. 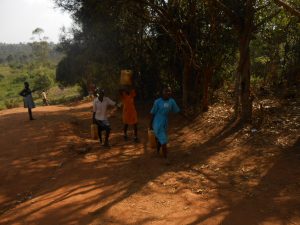