11 Kampala public schools adopt energy-saving technologies to save the environment.

He has seen firewood use at the school reduce from three trucks to one and a half every term since the school adopted the use of a bio-digester and improved charcoal stoves in 2017.

This has helped the school of 1500 pupils save Uganda Shs 1.5m as expenditure on firewood has reduced from 3m to 1.5m a term.

And this is also important for the environment.

Okweny says the environment around the school is now cleaner since they reduced the use of firewood. The school also uses the manure to grow vegetables which feeds the children.

Stephen Galima, the coordinator, Natural Forests Management at the National Forest Authority says any technology that reduces the cutting of  tree helps in saving the environmental as cutting trees for energy use especially firewood  is one of the main drivers of deforestation in Uganda.

A biogas digester is a tank where a process turns waste including human waste into gas energy. Schools can generate sufficient biological waste to sustain such digesters

The one at Kisaasi was built under the Schools for Energy to promote energy efficiency and use of renewable energy in school by Kampala Capital City Authority (KCCA).

Najib Lukooya, the deputy director in charge, sanitation, and environment at KCCA says this is part of KCCA Action Strategy to help in the reduction of carbon emission.

“On average bio-digester has reduced expenditure on charcoal by between 20-30%,” he revealed. He said gas from the bio-digesters is used to cook teachers’ food, and children porridge complementing on other sources of energy.

Sarah M. Ocwieja who did a study Life Cycle Thinking Assessment Applied to Three Biogas Projects in Central Uganda for her Master of Science in Environmental Engineering at Michigan Technological University 2010 asserts that biogas projects can be an appropriate technology for the urban and rural populations in Uganda as long as some conditions are meant.

“Certain small steps can be taken to help with the success of such a project,” she recommended in her thesis.

She said there was a need to provide a manual (in the local language) so that the community has a reference for troubleshooting.

She added that maintenance and repair professionals should be trained to serve systems built and organized by a larger project. This would prevent the system from falling into disrepair. Lastly, she suggested walking through the budget, design, construction, and operation of the system with all stakeholders.

The use of firewood for cooking is one of the main drivers of deforestation in Uganda leading to the release of carbon in the atmosphere hence global warming and climate change. Any reduction in the use would preserve the environment.

Lukooya said the authority was looking at complementing the bio-digesters that uses human waste with animal waste. He said they would start with schools that have sizable land where livestock can be kept.  He explained that this would further reduce the expenditure on firewood by another 30% making it 60%.

For now, Okweny request to KCCA is to send him a bigger cooking stand. 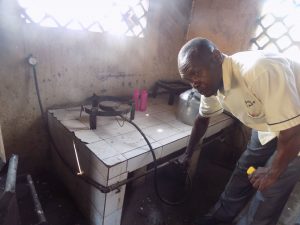 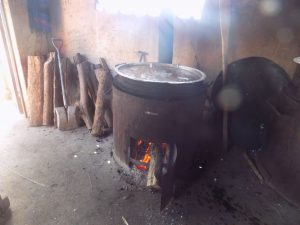 Report on the state of Collaborative Forest Management launched.