A tissue culture laboratory that can produce over 2 million Irish potatoes first-generation plantlets (seedlings) in a season has opened in Namawojjolo in Mukono district.

There are two Irish potatoes seasons in a year. Each first-generation plantlet can produce 30 tubers, and the process goes on up to the third generation.

The laboratory, a branch of Agro Genetic Technologies (AGT) owned by Erostus Nsubuga was opened by Rebecca Kadaga, the Speaker of Parliament on Monday.

Tissue culture is the growing of plant cells in test tubes. Cells of interest that develop into plantlets are selected and put on an artificial media which provided the necessary nutrients, just like it would be soil.

However, temperatures and nutrients are controlled. With the technology, the plant breeder is able to produce fast and in bulk clean plantlets free of diseases. It is commonly used in vegetative crops like banana, Irish potatoes, and cassava. Crops that don’t develop from seed.

Nsubuga said he was investing in the production of quality Irish potato plantlets because of the potential he sees in the Irish postpose industry.

The rise of urbanization has increased the consumption of the crop and dealers say they import from Kenya to satisfy the market.

Nsubuga revealed to the Speaker how his laboratory has the technology to deploy genetic engineering in solving some of the country’s agricultural challenges of pests and diseases and prolonged droughts.

We great jobs and employment though some see the private sectors as only interested in profits,” he said.

A strong advocate of genetic engineering Nsubuga reminded the Speaker of how the lack of the Genetic Engineering Regulatory Act (GERA) was affecting innovations in the agricultural sector.

Kadaga has passed the biotechnology bill twice with no success convincing President Museveni to assent it.

The President’s concerns have centered on genetic preservation and on how the modernists can share benefits with the traditionalists who have kept some of the species for millennials.

Kadaga said they were going to handle the issues of the Act with urgency, explaining that success depended on explaining the benefits of the technology to those opposing it.

The biotechnology bill now referred to as GERA requires ¾ of the parliamentarian for it to pass as law after the President declining to assent it for the second time.

“He has lessened the pressure on us. We need more private players on board,” he said

Irish potatoes are touted as the crop of the future. Researchers say it will be important to feed the ever-increasing population. It yields an average of   30-40 tons from an acre and can grow in many parts of the country.

Support science journalism. You can reach out to Science Now Mag by sending an email to bendanabd@gmail.com 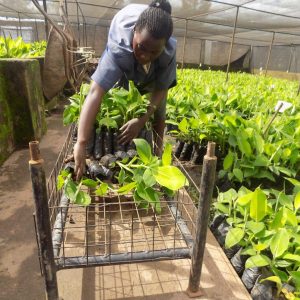 Bio-economy as a catalyst for Uganda’s middle-income status